After Nero’s burning of in 64 AD Christianity would become illegal.

Peter’s death occurred in after Nero’s persecution broke out.

It appears this letter was written from .

In 5:13 Peter writes, “She who is in , chosen together with you, sends you her greetings.”

is also a figure of immorality, the anti-god attitude and materialism.

The evidence not read “” as figurative speech for are:

Peter has been accepted as the author of this letter since the early days of the church.

It wasn’t until the corrupt biblical criticism of the 1800’s became popular that anyone even mentioned that Peter wasn’t the author.

Some critics have said the style of Greek in this letter are beyond Peter’s ability since he was a Galilean fisherman.  But, Peter would have spoken Greek and been very              familiar with it.  Also, according to First Peter 5:12 Silas was the scribe who            wrote the book down for Peter:

“With the help (“through” or “by means of”) of Silas, whom I regard as a faithful brother, I have written to you briefly, encouraging you and testifying that this it’s the true grace of God.  Stand fast in it.”

This book would have been written in between 63-65 AD

Peter appears to have been familiar with Paul’s letters written from prison around 61-62.
Peter was martyred by Nero between 65-67 AD 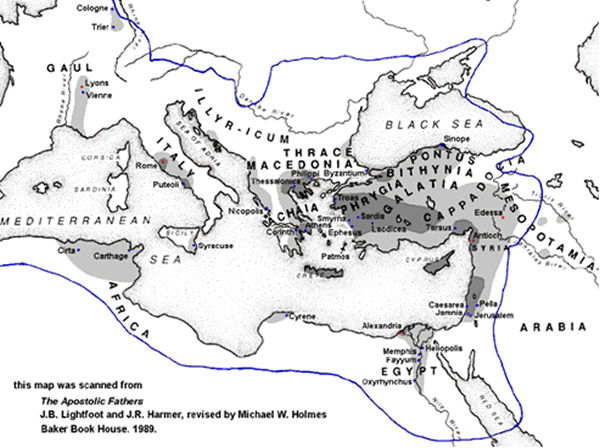 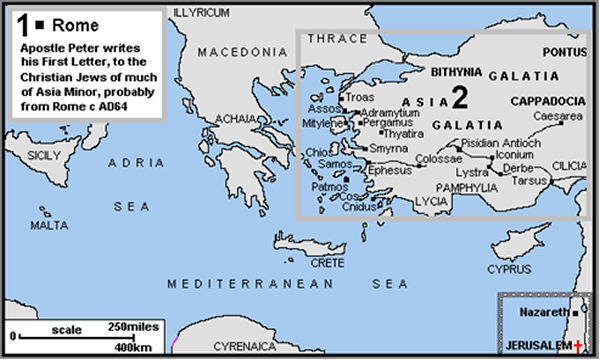 , , Cappadocia, Asia, were Roman provinces in .

1 Peter, an apostle of Jesus Christ, To those who reside as aliens, scattered throughout , , Cappadocia, Asia, and , who are chosen

2  according to the foreknowledge of God the Father, by the sanctifying work of the Spirit, to obey Jesus Christ and be sprinkled with His blood: May grace and peace be yours in the fullest measure.

“apostle” (apostoloV) – an official representative who was appointed and authorized by the one doing the sending.

“elect” (eklektoV) – elect, from the verb form that means to pick out, to select.  This   word was used in the papyri to mean “select” or “choice”

“strangers” (parepidhmoV) – one who lives alongside of.  A sojourner.  A person living temporarily as a foreigner, staying for a while in a strange place.

“scattered”  (diaspora) – means “dispersion, scattering, diaspora”  It is a word used of the Jewish ciaspora that came from deportation and movement into foreign lands.        Here Peter uses a term normally used for and places the meaning on the believers in the church age.

A term used of in the OT as being God’s client nation to reveal himself to the world with.