There are three themes in this chapter:

a)      The heathen nations inability to refute Yahweh’s sovereign control

c)      Yahweh’s plan to use a man of outstanding character to be ’s redeemer and deliver them.  This man is called “the servant” (Cyrus, Jesus)

This is the image of a courtroom scene.

Vs. 1 a call to judgment

Vs. 5-7 frightened response of Gentile nations

God calls the nations to a court case.

Ironically, He tells them to “renew their strength!”

a)      This could be a reference to go to their idol worship and false philosophies to get organized and empowered to stand before the judge of the universe.

b)      But, probably this is an invitation to the nations to respond as Isaiah wrote in 40:31 that “those who hope in the Lord will renew their strength.”

These Gentiles could be heirs of the promises of God along with God’s chosen people if they responded. (Isaiah 19:24-25; 27:13)

God is asking who among the nations can call on a conqueror to defeat all the nations.

Who is going to give Cyrus the nations?  The Lord is.

The fact that God tells them ahead of time that he is going to overrun them with Cyrus (later called by name in44:28 and 45:1)

Who can manipulate kings, generals, nations and empires in his divine plan and strategy?

The nations hear and they know it is God.

They approach him but not to submit.

They encourage each other in their rebellion saying, “Be strong!”

The source of their hope and strength is their idols and false philosophies.

These verses give us a description of the labor, the planning, the cooperation and teamwork to create an idol.  Finally, the inspector comes and declares it “good”.

Would it not be easier to trust God?  Isn’t organizing and leading a revolt a lot of work?

This rebellion of the nations is summed up in Psalm 2.

He will deal differently with than he deals with the nations.

The nations need to fear, but does not.

Though will be punished and disciplined they will honor God and be delivered.

God tells where they have come from.

Their identity is all based on God, his will, his actions, his plan.

They need not be afraid.

Because verse 41:9 is true and God is not going to change, then the statements in verse 41:10 are also true for :

Never before had an exiled nations been brought back to their homeland to start over.

is the only nation to undergo the five cycles of judgment and be brought back as a nation.  This has happened twice.

The promises to continue but this time in reference to their enemies and the nations that opposes them.

a)      Disgrace and shame to those who rage against

b)      Opponents are as nothing and will vanish

Of course, these promises were fulfilled in Cyrus’s day.

But, the principles of God’s dealing with continue like this forever.

God says he will defend even though Jacob is a defenseless worm.

Worm is used to describe Jacob’s condition and inability to help themselves.

Worm is obviously NOT a term used to ascribe ’s value to God.

The worm has a relative, a next of kin called “go’el” in Hebrew and translated    “redeemer”.

This is the first of 13 appearances of the word this book.

The “go’el” or “redeemer” was the next of kin in Hebrew culture that was responsible for their well being.

In the OT it is used as both a positive and a negative.

In its 13 uses in Isaiah it is used along with:

These descriptions and titles show that God is well able to be redeemer.

Who could stop him?  He will deliver and He will have vengeance on the other nations.

Here he is the unhindered Holy One who can do what is right every time and no one can stop him.

Here the worm, the tiller of the soil in 41:14 has become the threshing sledge of the mountains and hills. 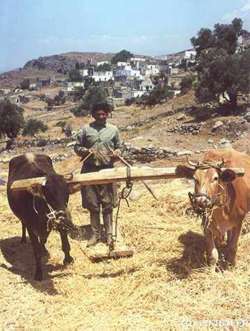 A sledge is used to tread the sheaves.
The sledge is drawn by cows or mules.
Its underside is set with flakes strips of band-saw shaped iron.

1)      frame of heavy timbers with sharp stones and metal

2)      one or two heavy rollers with stones and metal driven in.

is described as a “new and sharp, with many teeth.”

is not a worn out, used tool.  They will be a sharp new tool for threshing

, as the threshing sledge of God, will crush mountains and hills.  And prepare them for wind of God to blow them away.

Anything that stood in their way to return from under Cyrus’ directions:

All of this was going to be threshed and blown out of the way in 538 BC.

Micah 4:10-13,
“Writhe in agony, O Daughter of Zion,
like a woman in labor,
for now you must leave the city
to camp in the open field.
You will go to ;
there you will be rescued.
There the LORD will redeem you
out of the hand of your enemies.

11 But now many nations
are gathered against you.
They say, "Let her be defiled,
let our eyes gloat over !"

12 But they do not know
the thoughts of the LORD;
they do not understand his plan,
he who gathers them like sheaves to the threshing floor.

13 "Rise and thresh, O Daughter of Zion,
for I will give you horns of iron;
I will give you hoofs of bronze
and you will break to pieces many nations."
You will devote their ill-gotten gains to the LORD,
their wealth to the Lord of all the earth.”

This is still God’s plan.  He will again thresh with .

Cyrus (580-529 BC) was the first Achaemenian Emperor.  He founded by uniting the two original Iranian Tribes- the Medes and the Persians. Although he was known to be a great conqueror, who at one point controlled one of the greatest Empires ever seen, he is best remembered for his unprecedented tolerance and magnanimous attitude towards those he defeated.

Upon his victory over the Medes, he founded a government for his new kingdom, incorporating both Median and Persian nobles as civilian officials. The conquest of completed, he led his armies to the eastern frontiers. Hyrcania and were already part of the . Further east, he conquered Drangiana, Arachosia, Margiana and . After crossing the Oxus, he reached the Jaxartes, where he built fortified towns with the object of defending the farthest frontier of his kingdom against nomadic tribes of . The victories to the east led him again to the west and sounded the hour for attack on and . When he conquered , he did so to cheers from the Jewish Community, who welcomed him as a liberator- he allowed the Jews to return to the promised Land. He showed great forbearance and respect towards the religious beliefs and cultural traditions of other races. These qualities earned him the respect and homage of all the people over whom he ruled.

The victory over expressed all the facets of the policy of conciliation which Cyrus had followed until then. He presented himself not as a conqueror, but a liberator and the legitimate successor to the crown. He took the title of "King of Babylon_ King of the Land". Cyrus had no thought of forcing conquered people into a single mould, and had the wisdom to leave unchanged the institution of each kingdom he attached to the Persian Crown. In 537 BC he allowed more than 40,000 Jews to leave and return to . This step was in line with his policy to bring peace to Mankind. A new wind was blowing from the east, carrying away the cries and humility of defeated and murdered victims, extinguishing the fires of sacked cities, and liberating nations from slavery.

Cyrus was upright, a great leader of men, generous and benelovent. The Hellenes, whom he conquered regarded him as 'Law-giver' and the Jews as 'the annointed of the Lord'.

Prior to his death, he founded a new capital city at Pasargade in . and had established a government for his Empire. He appointed a governor (satrap) to represent him in each province, however the administration, legistlation, and cultural activities of each province was the responsibility of the Satraps. Accoding to Xenophon Cyrus is also reputed to have devised the first postal system, (Achaemenide achievements).

His doctrines were adopted by the future emperors of the Achaemenian dynasty. Darius I (521-486 BC) brought together skills and craftsmen from all over the empire in building the city of .

This is the third portion of this chapter.

2.      God speaks to in verse 8-16 assuring them they are not like the other nations and that He will take care of them.

is searching for water.

The poor and needy here represent the powerless .

The water represents much more than physical water

God will provide in places that there is no provision

a)      rivers flowing on hilltops

e) trees in the desert

f) pines in the wasteland (seven total trees are mentioned)

So people will know it was an act of God.

So will know he is still taking care of them

These verses describe the Servant (Cyrus and Jesus)

41:21-29 Yahweh makes it clear he is the one to trust because he can control and so predict the future.  This is his argument in these verses.

The court case resumes after the verse of encouraging .

The idols are asked to demonstrate their power, control and foresight of the future.

The verdict is in: They are proved worthless compared to the creator who unleashes on them his plans for the future.

God proves he is better than the idols

Cyrus came from the East but took from the North.  North is also the reference of from .

Cyrus called on God for example in Ezra 1:2-4 where he says, “The Lord, the God of heaven, has given me all the kingdoms of the earth. . .”

The idols didn’t even know he was coming

God did and he was the first.

God made these predictions 160 years in advance.

None of the idols said anything

The difference here than in 41:24 is that instead of judging the idols God judges the idolaters.

The idols words and philosophies are wind and confusion

Colossians 2:8, “See to it that no one takes you captive through hollow and deceptive philosophy, which depends on human tradition and the basic principles of this                    world rather than on Christ.”

Ephesians 4:14, “Then we will no longer be infants, tossed back and forth by the waves and blown here and there by every wind of teaching and by the cunning and         craftiness of men in their deceitful scheming.”