This is the fifth of a series of woes (The word “woe” is used 7 times.)

Four of the five woes are directed at God’s chosen nation.

This fifth woe is the only one directed at a foreign nation.  This nation is .

These woes run through chapters 28-33.

Chapter 32 speaks of righteous rulers in time that foreshadow the Messiah and his  kingdom.

has not yet been destroyed.

had accepted money from Hezekiah in a peace agreement.

8:13  “Now in the fourteenth year of king Hezekiah did Sennacherib king of Assyria come up against all the fortified cities of Judah, and took them.

18:15 Hezekiah gave [him] all the silver that was found in the house of Yahweh, and in the treasures of the king's house.

No one dared to break a treaty with Assyria or else would destroy their land.

There like an eschatological message in this that may be speaking to the ultimate Destroyer and the first Traitor: Satan.

“When you stop destroying” refers to the time when , like all nations in time, will come to an end.

This is one of the themes of human power in the scriptures:  It will ultimately cease.

These empires must spend their time in their glory and their prime realizing that this day of judgment at God’s direction by the hands of the other nations will come.

When saw that nothing they did could deliver them they turned to God.

When all their treaties, trips to , and tribute to had failed Sennacherib’s field commander stood at their walls.

At this final moment they cried out to God.  It was easy to wait on God then.  They had no other choice other than to completely harden their heart.

God had often spoke through Isaiah that when the people decided to call on God he would deliver them.  An example of this promise is in Isaiah 30:18:

“Yet the Lord longs to be gracious to you; he rises to show you compassion.  For the Lord is a God of justice.  Blessed are all who wait for him!”

Notice:  Isaiah ministry is starting to produce fruit in the lives of his people and in the values of his nation.

It has taken more than 35 years.  That is an entire 40 year generation.

How can Isaiah suddenly speak of deliverance for now when he has been predicting destruction in the first four woes?

The people’s focus has changed.  They were trusting in nations up until this point.

When the people’s focus changes then God’s response changes.

God was using Isaiah and the Assyrians to cause his people to cry out to him.

When they cry out for help then is in dangerous ground because they are attacking people who are seeking God’s help.

Trust nations and be destroyed by God.

Trust God and the oppressing nations will be destroyed.

“We long for you” or “We wait for you” indicates a change of faith focus.

No longer are they looking for .

The result is “all of was saved.  Now, an entire generation had been lost, but in the end the people of this day were saved as a whole.

A greater future day is coming for .  When they have no other option but to cry out to God for help he will deliver.

The warrior roles up his sleeves or bares his arm for the battle.

Isaiah 51:9, “Awake, awake!  Clothe yourself with strength, O arm of the Lord; awake, as in days gone by, as in generations of old.”

Isaiah 52:10, “The Lord will lay bare his holy arm in the sight of all the nations, and all the ends of the earth will see the salvation of our God.”

Isaiah 53:1, “Who has believed our message and to whom has the arm of the Lord been  revealed?  He grew up before him like a tender shoot, . . .”

The Lord is anticipated appearing for deliverance.

The nations that where feared (both positively – sought to help, and negatively – as a destroying enemy) are overthrown.

When God has finished his quick destruction of the nations what they had taken as plunder will be pounced on by men like young locust.

The Lord’s victory will place him as clearly the supreme ruler over all.

From his exalted position he will provide justice and righteousness to the people.

This is similar to many other verses including Isaiah 32:15 where the Spirit is pour out from this exalted position of the Lord.  There the result is physical productivity along with justice and righteousness.  Righteousness is said to produce peace, which results in quietness and confidence.

After the Lord has defeated his enemies and been enthroned in glory he will provide justice and righteousness.

This justice and righteousness will be the foundation of civilization and culture at that time (or, anytime it is allowed in any culture at anytime in history, including      ours.)

The results here are said to be:

The key to this treasure is:

FEAR OF THE LORD.

Proverbs 1:7, “The fear of the Lord is the beginning of knowledge, but fools despise wisdom and discipline.”

“Beginning” does not mean you start there and leave it.  It means it is the first and controlling principle.

He is the foundation or the cornerstone of 28:16.

33:7-16 These verses (7-9) describes the situation was under at the time due to the Assyrians.

In verses 10-16 we see God’s response to the crisis and to the people’s faith.

Heroes and diplomats can not help.

The warriors who were to defend the city are crying.

The envoys who had gone to to secure protection weep.

Those who signed the peace treaty with and gave Sennacherib Hezekiah’s payment are despised because their promises to the people failed since        Sennacherib did not honor their treaty.

Now finally the people are waiting on God and they will be blessed. 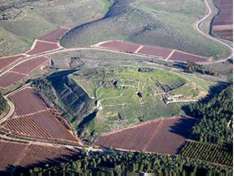 is generally regarded as the second most important city in the southern .  It enters the biblical narrative in the battle accounts of Joshua, Sennacherib and Nebuchadnezzar.

Approach Ramp
The city was surrounded by two walls including a lower retaining wall.  The approach ramp led to the outer gatehouse which in turn led to the inner triple-chambered gatehouse.   is the only tell in the country that is owned by the Israel Antiquities Authority.  They inherited it from the British who purchased the site for excavation.

Siege Ramp
The only siege ramp excavated in the ancient Near East is this one constructed by the forces of Sennacherib in his 701 B.C. invasion of .  More than 1000 iron arrowheads were found in the ramp as well as a chain for catching the battering rams.   This ramp is depicted in Sennacherib's siege reliefs with five battering rams ascending it. 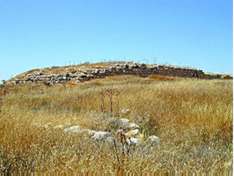 At the end of the Judean monarchy, this governor's residence was half an acre in size.  It is the largest Iron Age structure known in .  Built on the summit of the tell, this palace was constructed in three discernible phases which help archaeologists to understand the length of the cubit in the earlier and later periods.  Evidence for the stabling of horses in the courtyard has been found. 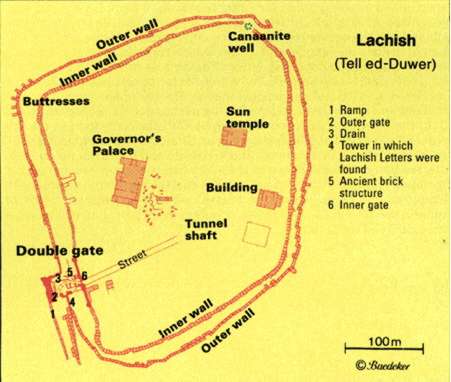 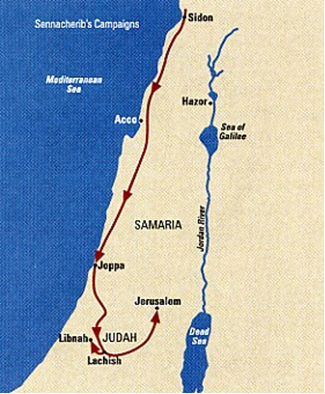 Sennacherib’s Campaign to and then
from to and Libnah.

This is God’s response to the people’s helplessness and their crying out to him.

He has been waiting for them.

Always after God tells you to “wait” there will come a time when he says “now” and he means “now”.

In this verse there are 3 “nows”

Only when we are focused on God and waiting will we hear his “now” clearly.

All of ’s plans and power where nothing but fuel for the fire ignited by their own words against God.

These verses describe how each group of people respond to God’s interaction in history.

Similar to Psalm 2:10-12, “Therefore, you kings, be wise; be warned, you rulers of the earth.  Serve the Lord with fear and rejoice with trembling.  Kiss the Son, lest he           be angry and you be destroyed in your way, for his wrath can flare up in a moment.  Blessed are all who take refuge in him.”

These are Jews who had rejected Isaiah’s message and now have seen it come to pass.

Suddenly they realize they can not endure or live in the presence of this holy God.

Whenever God manifest himself the first thing people sense is a feeling of sinfulness.

God revealed in his glory our need for righteousness becomes the focus of our thoughts, then our statements and ultimately our actions.

God’s character and God’s power can not be separated.

Who can survive the appearance of God?

§         He who shuts his eyes against contemplating evil

“Lord, who may dwell in your sanctuary?  Who may live on your holy hill?”

This man “will never be shaken.”

“Who may ascend the hill of the Lord?  Who may stand in his holy place?

“Such is the generation of those who seek him”

33:23-24 – A contrast of our (’s) present condition to the blessed state.
rigging, mast, spread we are unable to move the ship or help ourselves.
Then, an abundance of spoils will be divided.  Lame will help and sins forgiven.