Melchizedek is the topic here because the readers are considering turning from Christianity and back to the Levitical system so they can be TRUE sons of Abraham.  The author is saying:

2)     Abraham honored Melchizedek.  So honoring Jesus as High Priest is exactly what Abraham would do.

The author is focusing on Jesus being a perpetual high priest so he goes to Psalm 110:4 to build on “the order of Melchizedek.”

“This Melchizedek, was king of and priest of God Most High.”

Melchizedek is mentioned in:

Melchizedek (or, Melchi-Zedek) was the king of an ancient city-state called .
was the home of the Jebusites and was called Jebus in:

1)     Jud 19:10, 11 – “But, unwilling to stay another night, the man left and went toward Jebus (that is, ), with his two saddled donkeys and his concubine.  When they were near Jebus and the day was almost gone, the servant said to his master, ‘Come, let’s stop at this city of the Jebusites and spend the night.’  His master replied, ‘No.  We won’t go into an alien city, whose people are not Israelites.  We will go on to Gibeah.’ ” 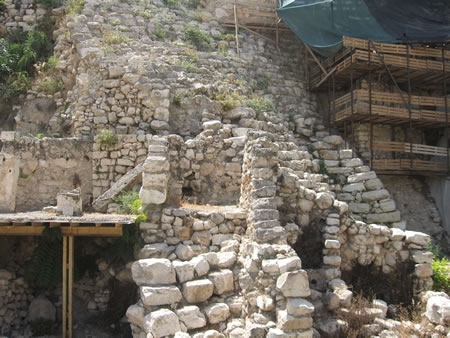 Jebusite wall from days of Salem and Jebus. This wall is located on the east
side of the City of David, just north of the Gihon Springs. See more of this Wall HERE 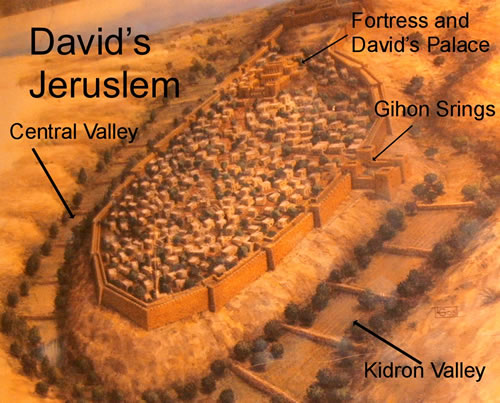 This is David's city of Jerusalem which is the same city of Melchizedek and Adoni-Zedek. 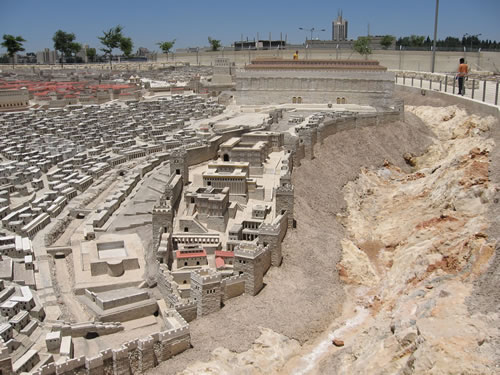 This is a picture of a model of the city of Jerusalem from 70 AD.
You can see the portion of the city known as the City of David with the temple in the
background. The pool of Siloam is in the bottom left.

Notice the City of David, the ancient city of Salem or Jebus, with the citadel on the northern wall.
This city was built on the old ancient rock core situated between the Kidron Valley on the east and the Tryophoeon (Central) Valley on the west.

This is a photo of Galyn under the City of David (Salem, Jebus or Jerusalem) walking through
the water of Hezekiah's tunnel that was cut out through the old ancient core that the city is built on.

“He met Abraham returning from the defeat of the kings and blessed him,”

“and Abraham gave him a tenth of everything.”

Amazingly, one thing that is not mentioned is the fact that the priest Melchizedek brought out “bread and wine”.  It seems it would be a perfect opportunity for the author to mention the Lord’s Supper.  Men like Cyprian (bishop in 249 AD) and Ambrose (338-397) later in church history connect Melchizedek’s offering of bread and wine to Jesus offering of his body and blood.  Again, the same order of priesthood.

“” is to be interpreted to mean “peace”

The Hebrew word “sedeq” which means “righteousness” is considered by the author and by Philo to be the meaning of Zedek in both Melchizedek and Adoni-Zedek.

“Without father or mother, without genealogy, without beginning of days or end of life, like the son of God he remains a priest forever.”

In the Levitical priesthood the genealogy was most important.  All priests had to prove their father’s genealogy back to Aaron or loose their priestly standing.

Here is a classic example of an argument from silence.  Since Melchizedek’s genealogy is not mentioned the author uses it to say it doesn’t exist.

Part of the inspiration of scripture may have presented him this way to preserve him as a type of Jesus, the true high priest.

Melchizedek is in a type what Jesus is in reality: Eternal.

But, Melchizedek is a real person with a real geneology:

Why Melchizedek is not Jesus in the OT or a Theophany:

2)     Psalm 110:4 says the Messiah will be a priest “after the order of Melchizedek.”  This makes a clear distinction between the Christ and the man, Melchizedek.

3)     Melchizedek was a citizen of an earthly city who lived his life as a king and priest in ancient .  A theophany appears for a moment and then is gone.  A theophany does not live out a life.

4)     To connect the name Zedek (righteousness) with Jesus, the king of righteousness, will not work when you add the name of one of the Jebusite’s wicked kings, Adoni-Zedek, into the mix.

“Just think how great he was: Even the patriarch Abraham gave him a tenth of the plunder!”

The word “plunder” or “spoils” is the Greek word “akrothinion” which means “top of the heap.” The Greeks would gather the spoils of a military victory and place them in a heap.  The top or the best part of the heap was presented to the gods.

“Now the law requires the descendants of Levi who become priests to collect a tenth from the people – that is, their brothers – even though their brothers are descended from Abraham.”

Numbers 18:21-32, The Levites received tithes from .  Then the Levites gave a tithe to the priests.

The right to tithe someone indicates a certain authority or right.  This is not a inherent superiority as if they were a better person but an official superiority.

“This man, however, did not trace his descent from Levi, yet he collected a tenth from Abraham and blessed him who had the promises.”

Abraham willing gave the tenth of his own free will but Melchizedek did receive it which indicates he recognized his position as a priest and accepted the tithe.

“And without doubt the lesser person is blessed by the greater.”

This is the point of a blessing.  The superior approves and accepts the work of the lesser.   It also says Melchizedek blessed Abraham.  This means more than he wished him well.   The blessing were God’s words of approval spoken through his priest Melchizedek to Abraham.

“In the one case, the tenth is collected by men who die; but in the other case, by him who is declared to be living.”

Again the superiority of the priesthood of Melchizedek is at hand.

The Levitical priesthood was constantly replacing the high priest since he would die.   But, Melchizedek is never recorded as dying.

“One might even say that Levi, who collects the tenth, paid the tenth through Abraham, because when Melchizedek met Abraham, Levi was still in the body of his ancestor.”

Levi is seen as being present in Abraham when the tithe was paid.

So, Melchizedek is superior to Levi which includes the entire priesthood

The Four Proofs of Melchizedek’s Superiority:

3)     Melchizedek’s priesthood was not replaced, but Levitical priesthood would die and constantly be replaced

4)     , Levi and the priests all paid tithes to Melchizedek through Abraham’s paying of the tithe