The Fall of Satan

“The thief comes only to steal and kill and destroy; II have come that they may have life, and have it to the full.” John 10:10 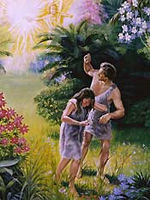 The Fall of Man (The First Man)

“I will put enmity between you and the woman and between your offspring and hers; he will crush your head, and you will

“The Lord God made garments of skin for Adam and his wife and clothed them . . .So the Lord God banished him from the

Garden of Eden . . .cherubim and a flaming sword flashing back and forth to guard the way to the tree of life.”  Genesis 3:21-24

Faith in the Promise

“In the course of time Cain brought some of the fruits of the soil as an offering to the Lord.  But Abel brought

fat portions from some of the first born of his flock.  The Lord looked with favor on Abel and his offering,

but on Cain and his offering he did not look with favor.”  Genesis 4:3,4 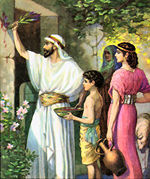 “On the tenth day of this month each man is to take a lamb. . . the animals you choose must be year-old males

without defect. . . all the people of the community of must slaughter them at twilight.  Then they are to take

some of the blood and put it on the sides and tops of the doorframes of the houses where they eat the lambs. . .

The blood will be a sign for you on the houses where you are; and when I see the blood, I will pass over you.

Psalm 22 - Quoted by Jesus on the Cross a thousand years later as this prophecy was being fulfilled.

“He was despised and rejected by men, . . . Surely he took up our infirmities and carried our sorrows, yet we considered him stricken by God,

smitten by him, and afflicted.  But he was pierced for our transgressions, he was crushed for our iniquities; the punishment that brought us

peace was upon him, and by his wounds we are healed.  We all, like sheep, have gone astray, each of us has turned to his own way; and the

Lord has laid on him the iniquity of us all.  He was oppressed and afflicted yet he did not open his mouth; he was led like a lamb to the slaughter . . .”  Isaiah 53:3-7 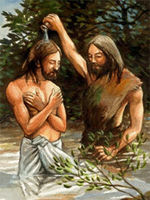 Jesus, the Lamb of God

“The next day John saw Jesus coming toward him and said, ‘Look, the Lamb of God, who takes away the sin of the world!”  John 1:29

“He was delivered over to death for our sins and was raised to life for our justification.”  Romans 4:25

“Therefore, since we have been justified through faith, we have peace with God through our Lord Jesus Christ, through whom
we have gained access by faith into this grace in which we now stand.”  Romans 5:1, 2 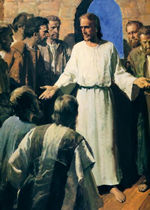 “Yet to all who received him, to those who believed in his name, he gave the right to become children of God – children born not of natural descent, nor
of human decision or a husband’s will, but born of God.”   John 1:12

“I saw the dead, great and small, standing before the throne, and books were opened. Another book was opened,
which is the book of life. . .If anyone’s name was not found written in the book of life, he was thrown into the lake of fire.”
Revelation 20:11-15