In chapter 3 Jesus was in with the orthodox Jews (Nicodemus) and water was used as a picture of salvation.

Now, in chapter 4 Jesus is in with the un-orthodox Samaritan crowd.

Where Nicodemus had everything going for him: Jewish, Male, Teacher, Sanhedrin

The Samaritan woman had everything going against her: Samaritan, Female, divorced, living with a man.

Jesus told Nicodemus he must be completely born again to see the .

Jesus told the Samaritan woman that He was the gift from God.

John calls Jesus “Lord” for the first time.  It has been established in the first three chapters that this is a fact.   John now assigns the title “Lord” to Jesus since he has proven it to be the case.

b)      divine leading led Jesus through

b)      The name was used of the area around the city and eventually the entire northern kingdom of .

c)      In 722 the northern kingdom of was overthrown by the Assyrians who deported the nations they destroyed.  Many Israelites where moved out and many Gentile nations were moved in.

d)      The northern Israelites intermarried with the Gentiles.  The culture and religions drifted further from Jewish culture, though some similarities remained

e)      The Jews from the south (Judea) returned from Babylonian captivity beginning in 538 BC considered the people of to be half-breeds and a corruption of the Jewish nation, religion and culture.

f)        Nehemiah’s people rejected the Samaritans and their help in building the walls of around 440 BC.

g)      The Samaritans built their own temple on which is next to Shechem around 400 BC and started their own religious system.

h)      The Jews from destroyed the Samaritan temple and Shechem around 128 BC.

i)        In Jesus day the Samaritans continued to worship on Mr. Gerazim.

k)      The Samaritan religion continues yet today with animal sacrifices and members who traced their lineage back to these ancient times.

l)        According to Josephus the Samaritans traced their lineage from Jacob through Joseph. 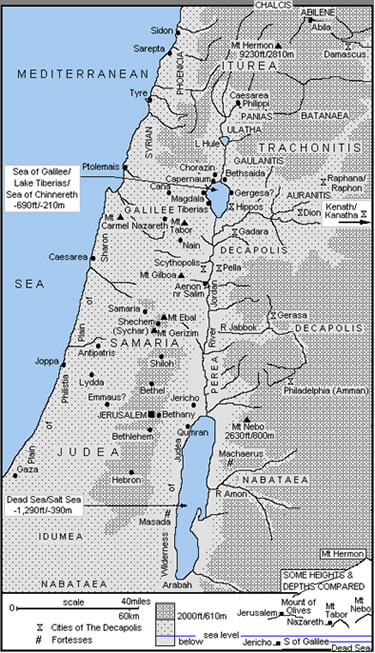 An orthodox Jewish man would not talk to a woman especially a Samaritan woman             nor would he have bought Samaritan food.

Jews prayed that no Samaritans would be resurrected.

When the religious enemies of Jesus called him names they used the term “Samaritan” (John 8:48)

The woman appears to insult Jesus but he ignores this just like he ignored Nicodemus’ compliment.  Jesus goes straight to the topic.

The woman acts as if she knew what “living water” was.

This well is still there today.  It is 75 feet deep and can be drank from today.

The woman claims Jacob as the father of the Samaritans, which would be an insult to a Jew.

OT references to water as the Spirit and Eternal Life

Jesus asks for her husband to make this socially acceptable

The woman didn’t want to wait and said she was not married.

By doing this Jesus reveals himself to her.

Jesus revealed himself to Nicodemus by appealing to Nicodemus’ understanding of OT scripture.

Jesus reveals himself to the Samaritan woman by amazing her with supernatural knowledge and showing her he was more than a man.

Jesus recognizes twice that she has told the truth.

The woman recognizes that Jesus was something special

The woman diverts the conversation away from herself and onto a theological issue.

The Samaritans chose as their place of worship in competition with because:

b)      God revealed himself to Abraham here and Abraham built an altar in Genesis 12:6-7

d)      The Samaritans added to the scriptures by saying:

“you” is plural meaning “you Samaritans”

They did not know God nor did they know what they worshipped because:

2)      They will influenced by pagan religions

3)      Their worship was false so it involved demon worship but they called it God.

This is called a hendiadys with one preposition (en or in) that speaks to both nouns (pneumati  SPIRIT     and        alhqeia TRUTH) that are connected by a conjunction (kai or and).  This would be read as “truly spiritual worship” and not as two nouns describing worship as “true” and “spiritual”.

The Samaritans where waiting for the Messiah.

Their understanding of the Messiah was based on Deut. 18:15-19 and they saw him mainly as a teacher.

Jesus does something that he does not do for the Jews until his arrests and trials.

He tells the woman that he is the Messiah.

The Jews were looking for a military leader and for Jesus to say he was the Messiah would have put visions of a Roman overthrow into their minds.

The woman presents here discovery as a question that needs to be investigated by others instead of a dogmatic statement.