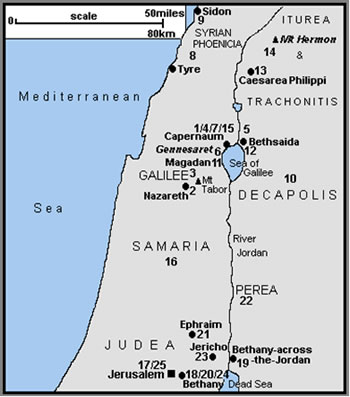 [7] From Gennesaret they make their way back to (Jn 6:24) and Jesus teaches about

JESUS PREACHES AND HEALS IN SYRIAN-PHOENICIA, ITUREA and TRACHONITIS, THE

[11] Reaching the , he crosses by boat to  the Magadan/Dalmanutha region

[13] Jesus now travels from , north to Caesarea  Philippi in Iturea and Trachonitis, where

[14] Continuing on from Caesarea Philippi possibly  further north towards , three

of the  disciples see Jesus Transfigured in the presence of Elijah and Moses (Mt 17:1;  Mk

9:37). Other traditions place the Transfiguration  to the south, on .

The epileptic boy would then have been healed in the area.

(Jn 8:2) and heals the blind man who is taken before the Sanhedrin

[18] During his travels in Judea, Jesus visits Martha and  Mary in

[19] Jesus withdraws to Bethany-across-the-Jordan (or Bethabara "where

HIS MINISTRY IN PEREA (MODERN JORDAN)

THE FINAL JOURNEY TO

[25] During the Easter week, Jesus returns to each day after staying overnight  in

This section continues to focus on who Jesus is.  Theologically it is foundational for Christology.

From this section we can conclude that Jesus is either the Son of God and the Messiah or else he is either:

a)      very misrepresented by John

Feast of Dedication was an eight day feast or Hanukkah (also called the Feast of Llights).  It was instituted in 165 by Judas Maccabeus after cleaning the after its desecration in 168 by Antiochus Epiphanes.  The Syrian king had replaced the bronze altar of burnt offering and replaced it with a pagan altar where he offered a pig to Jupiter.  It falls around December 22.

Because it was winter Jesus taught in the long hallway called Solomon’s colonnade on the east side of the temple courtyard.  The colonnade.

Model of “Herod’s temple” which stood between 19 BC and AD 70.  The was bordered by columned porticos(1) which on the east side, (immediate foreground) included Solomon’s Colonnade(2).  Here Yeshua spoke with the Pharisees in John 10:22-39.

Jesus had told people that he was the Messiah.  (the woman at the well, his disciples, etc.)

But he had not made a public announcement because all kinds of people including the patriots and the militias would have made a move.  So in this sense Jesus had not reveal himself to the public, but for those that had been listening he was very clear.

Jesus had done the works that the Messiah would do.

Anyone could come and make a public announcement, “I am the Messiah.”

Only Jesus could do the works of the Messiah.  His works spoke for him.

“One” is neuter and not femine or masculine.  In the Greek this means “One Thing”.   To mean “One Person” it would have to be masculine (or, feminine).

POINT:  Jesus and the Father are the same “thing”, they both have the character of God.

They are not the same person so Jesus is not the Father and the Father is not Jesus.  The Greek does not say that.

The Jews asked for a statement of his Messiahship and he told them that He and the Father were the same thing or of the same divine essence.  It was more than they wanted to hear.  In their theology the Messiah may have been a great man that God anointed but for a man to claim to be God is more than they can handle.

Jesus stops the stones by asking a question

Jesus brings them back to the miracles since that was his proof of his claim.

Jesus does not try to correct the Jews accusation, “You. . . claim to be God.”

“It stands written” is John’s formula for citing scripture as proof.

In Psalm 82:6  the term “gods” (eloim) is used to refer to ’s judges and their position they were given from God.

Jesus’ point is if God’s own word calls men “gods” why should the Jews be upset with Jesus applying something that could be very similar.

The judges (similar to authority and government) stood in the place of God before the people.

Jesus may be trying to get them to argue about the proper use of the word “eloim” and its reference to man before they consider if He is God.

Basically Jesus stalled his execution for blaspheme by citing Jewish scripture that said the same thing.